Home » Current events » Why study the book of Daniel?

Apr 23, 2015 · by Mark McMillion · In: Current events, Daniel videos and texts, Insights, My past, The Future and Endtime 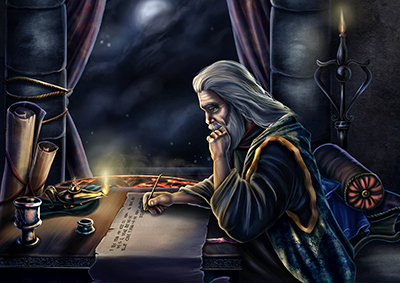 With the way the world is in these times, more and more people have at least some curiosity about Bible prophecy and the future it tells us of. But once you start searching around, you can really find some different, even opposing ideas about it all. So much of it can even engender fear or confusion.

Often folks just give up trying to grasp any constants or absolutes that can be found about the subject of Bible prophecy. Some have even said, “Hasn’t the book of Daniel already been fulfilled? Isn’t it only written for Jewish people?” That’s what some say.

Recently I was meeting with a group of people who are studying the subject of prophecy in the Bible. The main thing we were reading was from the book of Ezekiel. It’s  being taught in this group that Ezekiel chapter 38 is in the  process of being fulfilled right now in currents events playing out in the Middle East, as a precursor to the final events leading up to the coming of God’s kingdom on earth. Then I have other friends talk to me about verses in Isaiah which they say predict a soon coming atomic annihilation the city of Damascus, Syria. Others in recent times have come to see Psalm 83 (written by King David as a prayer against the nations he was battling with in 900 BC) as being a specific endtime prophecy which is about to be fulfilled in current events in the Middle East 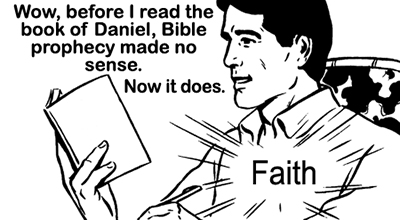 So, why am I doing a series on the book of Daniel? Shouldn’t we be studying Ezekiel or Isaiah? Or Psalm 83? Here’s why. If you’re looking for authority in the Bible, there’s no greater than Jesus Himself. Did He talk about the future, the time before His return and His coming Kingdom?  Absolutely. The two main chapters where He talked about this were Matthew 24 and Mark 13. He’s quoted as saying this in both chapters but I’ll quote from Matthew 24:15. “When you shall see the abomination of desolation, spoken of by the prophet Daniel, standing in the holy place (whoever reads, let him understand).”

When asked about the future, Jesus didn’t refer to Ezekiel, or Isaiah, or any other book in the Bible. But He did refer specifically to the book of Daniel and even to a specific passage of Scripture in that book. Then He went on to say, “Whoever reads, let him understand.” Jesus both emphases that book and made it unusually clear, highlighting the importance of understanding that particular passage.

Admittedly, that verse, Matthew 24:15, is not very easy to understand at first glance. That’s one of the reasons why, in my series on Daniel, I start with the first prophetic chapter in Daniel and then build on it. The series begins with Daniel chapter 2, then goes on to chapters 7 and 8, before we are really ready to look at this emphasized statement that Jesus made about certain passages in what turns out to be Daniel 9 and 11.

Then, if we look at what is considered the most specifically prophetic book in the New Testament, Revelation, it is full of material that refers back to characters and events  first introduced in Daniel’s visions and prophecies some 600 or more years earlier than the date of Revelation. 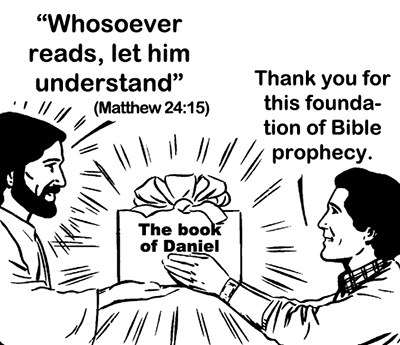 It reminds me of what Paul said, “I as a wise master builder have laid the foundation and another builds thereupon. But let every man take heed how he builds thereupon. For other foundation can no man lay than that which is laid.” (I Corinthians 3:10) Paul was not speaking here about Bible prophecy and the book of Daniel. But what he said can very much apply to the foundation of endtime prophecy that the Lord revealed to Daniel and which Jesus pointed us toward. It just seems like so many today are busy building edifices of endtime prophetic interpretation on little, if any, solid foundation. Simply finding some passage in the Old Testament that seems conveniently to match some aspect of today’s world and then proclaiming that as our major insight into current events and the future is a pretty shaky way to portray the events of the future according to prophetic Scripture.

With so much being wondered about nowadays having to do with fulfilled prophecy and possible events to come, I’m convinced that an understanding of Daniel’s prophecies offers the best hope of establishing a foundation for understanding future certainties. And no, definitely it’s not all been fulfilled. Numerous things that are first clearly spoken of in Daniel, and further clarified in Revelation, just haven’t happened yet. And it seems Jesus Himself pointed us to this beginning point when He referred to specifics in Daniel yet to be fulfilled and said, “Whoever reads, let him understand.”