Home » Current events » “The Whites of Their Eyes” 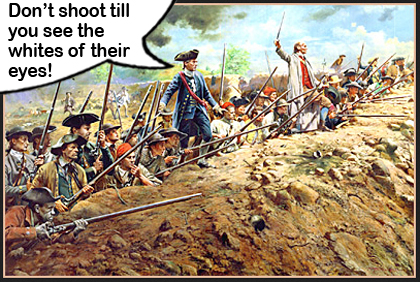 There used to be an old saying, “Don’t shoot till you see the whites of their eyes!” The idea was that you don’t shoot your gun till the target is close enough that you can actually see what you’re shooting at. Maybe that was what was said by military commanders 200 years ago or so.

And that principle could certainly apply to modern pronouncements on Bible prophecy. I’m appalled at times by how many people are convinced without a doubt that… (take your pick) …Obama is the Antichrist? The Pope… no, wait; Islam is the seedbed and fountain head of all evil, the primordial force of Satan in the last days? And on it goes.

“They” are out to get us. Five years ago in Houston I was in a gathering of sober and sincere Christians and we were told that the roads out of Houston would be blockaded within 6 months… 6 months I tell you!… and everyone would be corralled in FEMA camps. A very serious Christian brother was telling this to us. That was in 2009. And on it goes. 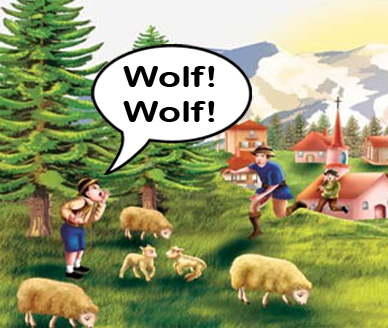 As a person who utterly believes in the coming of the Lord and that we’re very likely living in the endtime, it interests me and also saddens me that there are so very many “Wolf, Wolf” calls coming from so many Christians at this time.

The Apostle Paul said, “Judge nothing before its time…” (I Corinthians 4:5) But this admonition is rejected or forgotten by so many Christians today as they jump on their soap box or band wagon to shout the latest “warning” which ends up being another false pronouncement and false dawn of troubles to come.

Invariable there is no accountability for the false proclaimer of immediate doom. But without hesitation or twinge of conscience they’ll re-proclaim their next declaration of imminent doom for a date another 6 months away. And virtually no one calls them on it or takes note of these ones who constantly proclaim imminent woe and it doesn’t come to pass as they’ve told us it would.

And yet I don’t disagree with much of what they are saying; just the continual over-specific-ness of their declaration, plus the fact that so often they just end up plain wrong. That’s the problem. 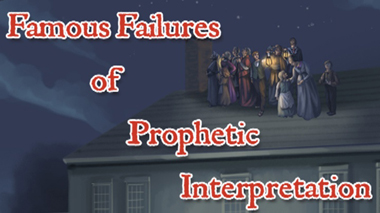 Very many see and realize that we live in dire times. But the common thing to do for many Christian commentators is to personally declare that some very short and specific length of time will expire before “the very end” is upon us. Actually I did a 7 minute video on this subject, called “Famous Failures of Prophetic Interpretation”, the link to that is here.

Like the guy said, “Don’t shoot till you see the whites of their eyes”. Jesus actually gave us some very specific things to look forward to, in the gospels, concerning the times leading up to His return. In my video series on the book of Daniel I have gone over some of those specific points, such as the appearance of “the abomination of desolation, spoken of by Daniel the prophet, standing in the holy place”. (Matthew 24:15)  This was the sign Jesus said to watch for which would mark the beginning of the “great tribulation” (Matthew 24:21) which is said to be in a surprising number of places a length of time of 3½ years. Jesus said, “Immediately after the tribulation of those days” (Matthew 24:29) is when He would return to gather His elect, His people.

If this is something you are interested in, perhaps you’d like to see the 40 minute video I did on the specifics and details of “the last 7 years” before the return of Jesus, as it is outlined in Daniel 9 and by the Lord Himself in Matthew 24. Here’s the link to that video on YouTube.

I utterly believe that the Bible gives us numerous things on the subject of the endtime that are solid, bedrock doctrines that completely hold up to scrutiny.  But present Christian dialog among believers on the coming of the Lord is cluttered, strewn and clogged with false declarations and false declarers. It seems the gullibility of His sheep is successfully taken advantage of over and over again.

Does it matter? Can’t we just go on enjoying the latest shout of woe, regardless of whether it is founded in God’s truth and actual reality? Jesus said “It would be better that a millstone be hung about your neck and that you be drowned in the sea than that you offend one of these little ones” (Matthew 18:6), one of His searching sheep, longing for the truth and looking to what they can find in Christianity to see if the truth is there. How many are stumbled and turned away by the sensationalists with their latest announcement when they see that their prophecy of imminence fell through and they were just another empty vessel?

God help us to have a higher standard. Jesus said He was the truth. (John 14:6) The Holy Spirit is “the spirit of truth” (John 16:13). So many who are involved with teaching prophecy would do well to heed the warning of centuries ago when it comes to foretelling the future.

“Don’t shoot till you see the whites of their eyes”. Don’t keep proclaiming things that must imminently occur when you really don’t know that for certain in Him. If you have a record of yelling “Wolf, Wolf” to the extent that you stumble the weak and are a pitiful testimony of the Lord’s Word and truth, please stop for your own sake, for the sake of His sheep and for the witness of Christ that is besmirched.