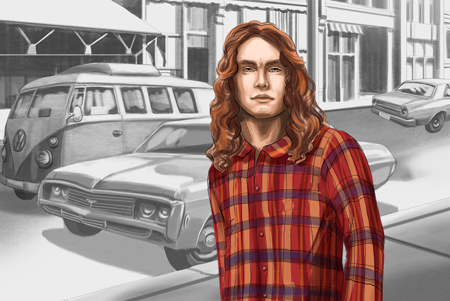 What I’m going to tell you here is the truth. But it might be hard to believe. I’m pretty sure this is the most supernatural experience I’ve ever had, at least when I was wide awake and on my feet.

In an earlier blog post I told you about “That’s not how to talk about Jesus.”, during a time in the early 70’s when I was witnessing daily at or near the University of California at Berkley campus. This is something that happened during that time there. My friends and I would daily take our “hippy bus” that we’d converted into something like a mobile coffee house and drive to a place near the Berkley campus. 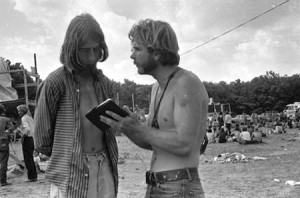 We’d break up into teams of two, like when Jesus sent his disciples out “two by two” (Mark 6:7). Then everyone would be off with their guitars and Bibles, witnessing to the students as well as the thousands of drop-outs and travelers that were everywhere around there at that time.

Since I was already one of the “older ones” in the Lord, as well as already being into my 20’s, I was the one who stayed back with the bus to take care of it, as well as to pass out sandwiches to anyone who came up and asked for one.

So this “person” came up to me. He seemed to be around my age and size. He had long red hair and a red plaid shirt. So far, so good; right? No big deal. But next I’m going to have to do some explaining. Because things quickly got different from anything I ever experienced, before or after that. 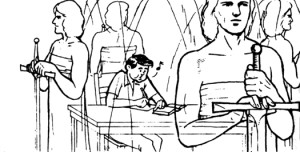 First, let me give you a verse that is important. We are “sealed by the Holy Ghost” (Ephesians 1:13). Someone may attack us physically and even hurt us, if God allows that. The devil can tempt us mightily. But the plain spiritual truth is that we are now the Lord’s, if you are one of His. We belong to a mighty God and no one can enter into our spirits and souls, except of course the Lord Himself. Or one of His messengers.

I started talking with this “guy” and rather quickly things got very different. I’ll try to explain it but it may not be as clear as you’d like. Of course we were speaking English. But what happened was that this being, also speaking English, had such weight, depth and significance in what he said that it was like I was quickly being taken by an elevator up into much higher levels of spirituality. I would say something and then he would respond. But each time, what he said dwarfed what I had said, leading our conversation into depths of spiritually that are hard to describe. 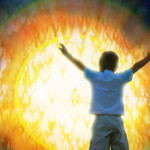 I probably should have written down every single thing I could remember from the experience, immediately after it was over. Sadly I didn’t do that. But the impact of it all was so overwhelming that I might not have even been able to do that.

After our conversation went on for a little bit, basically it got to where it transcended language and English. I guess we were speaking English but our communication was on a higher, more heavenly level than normal English can transmit. And actually, this was all more than a little bit disconcerting. Basically I was facing a being that was much more powerful than me, which could get through any kind of defense or normal ways of man that I might throw up.

I had faced demon-possessed people before and I’d had some spiritual experiences of different kinds. So I was aware at the time that this was an extremely spiritual experience I was having there in the parking lot. There was some fear on my part. But at the same time I could tell and feel that this being was benign, not malevolent. And the fact that basically it was able to get past everything of me and to be speaking and interacting with my innermost soul and spirit was disturbing and a little scary. I guess if I’d wanted to, I could have run off. I was not forced to be there. But basically what ended up happening can only be described as some kind of energy transfer.

This angel was very serious and sober. It’s a shame I don’t have anything I wrote down from that experience but back then I didn’t know I should do that. But my strongest remembrance of the experience was that it was like he reached out, gripped my soul and spirit and just sent a strong surge of spirit and energy into me.

The message, if there was one, was that I’d been shown and knew a lot. And that I was very accountable. That I should be very sober and should very much “walk worthy” (Ephesians 4:1) of all that had been shown me and done for me. It wasn’t that this angel was mad at me. But it was just an extremely sober, serious moment and the presence of the fear of God and the knowledge of how important all of this is was just immense.

In many ways, words kind of fail me to be able to describe this experience much more than this. It was in broad daylight in a parking lot near the Berkley campus. I felt like that “being” could have tossed me 100 feet in the air or struck me dead on the spot if that had been his will. Also, I guess it’s like another blog post I wrote “Fear God“, where I talked about the verse “the fear of the Lord is clean”. (Psalm 19:9)

I was afraid. But there was nothing destructive happening with this. If anything was destroyed, it was my shallowness, wavering or anything other that just utter commitment to serving the Lord. I guess I wasn’t thinking that I was shallow or wavering at that time. But the Lord wanted to really strongly impress upon me the imperative of commitment and focus to put Him and His will first.

Actually I was in the first weeks of getting ready to move abroad, to Europe to be a missionary there. So maybe this visitation was a strengthening and sobering message and experience from the Lord to prepare me for the times and battles to come as I left my home country to be a missionary abroad.

It was almost like an umbilical cord. This guy never touched me but he didn’t have to. His spirit and words got passed my mind and my own spirit and just infused me with a warning, with power, with spirit and with thoughts I can’t even put into English. It’s a little like it was pictured in the movie “Matrix” where the Keanu Reeves character, Neo, got a link into his neck and got a data transfer of knowledge. Except in this case, it was real, it was face to face and it was like the angel’s spirit infused my spirit and soul with things of the Lord that I can’t really explain as well as I would like. 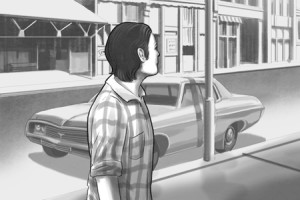 And then he left. I was ok, very shaken up but all the better for it. I’ve never had an experience like that again. I’ve had one or two other angel experiences, I’ve shared some of those in these posts and I’ll try to tell about the others. I know, if I was someone reading this post, I might be tempted to think that guy is lying or just making this up. But I’m not.

Angels are out there. “The angel of the Lord camps round about them that fear Him and delivers them.” (Psalm 34:7) They’re there to keep us on the straight and narrow for the Lord. But it’s all not even really easy to write about as it just is above our normal experiences so much that the words used don’t seem equal to the experience.