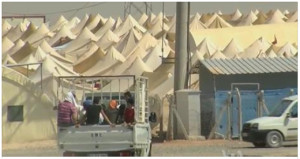 This is the first time I’ve made a news item the main substance of a blog post. But this article so struck me as good news, as well as an antidote to what I feel has been so much fear and terror that’s been spread on Christian web sites in response to recent events in the Middle East.

So this is a great article for the fear mongers and terror advocates. God’s not dead or even sick! It’s not all beheadings and terror in the Middle East. Here are Christians witnessing and singing, worshiping and bringing others to Him, even during their personal “great tribulation”!

For many Christians here in the West, they teach and believe that the Church will be waft away before the “great tribulation” (Mathew 24:21). But the Lord didn’t rapture out these suffering Middle Eastern Christians and we won’t be raptured out either, at least not the way many teach and believe.

This is a great article to show that “they that understand among the people shall instruct many.” “They shall be strong and do exploits”, (Daniel 11:32 & 33) even during great tribulation. I’d already been hearing this news from my missionary friends who have been in those places for decades. This article shows that there are those there who are standing up for Him, as more of us will be someday in similar circumstances.

This was found on the web site www.breakingchristiannews.com. I don’t know these folks and I don’t know what they believe. But it’s great that they are letting us know about these victories for Him as this Middle Eastern Christians stand strong for Him. Here’s the article:

Despite ISIS Grip, Holy Spirit is at Work:

“They asked us if God even exists for this to be allowed to happen. It was very difficult, but the Lord has given us grace in their sight to represent Jesus and the love of the work, which was shown to be wonderfully accepted among the Yazidis. They asked us to come back and took all our Bibles ‘in secret.'” 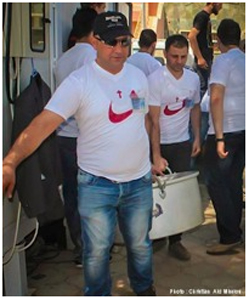 In the Kurdish area of Iraq, where people of different beliefs fled atrocities of the Islamic State (ISIS), the Iraqi ministry team supported by Christian Aid Mission found people in need of water, food and medicine.

Fatima, an Iraqi woman who fled atrocities committed by the Islamic State, was drawn to the sound of singing in a tent in a refugee camp in Dohuk, in the Kurdish region of Iraq. She approached cautiously.

Fatima, her husband and three daughters put their trust in Jesus for their salvation, and within a few weeks her involvement led to another 60 families making the same commitment, according to an area ministry leader supported by Christian Aid Mission.

“Tent churches are going on everywhere,” said the ministry leader. “Last week we had 68 families openly surrender their lives to the Lord. With all their large needs and difficult situations that they are going through, they thank God for the indwelling of Christ in their hearts. Twelve of those families were Muslims.” In addition, 200 children who received Bibles and coloring materials prayed to accept Jesus into their hearts.

Broken Hearts
Near Amerli, which Islamic State fighters besieged for more than two months before Kurdish and Iraqi forces aided by US warplanes drove them out on Sept. 1, the ministry leader’s team encountered people in need of water, food and medicine. In a visit with a group of families able to escape before the ISIS siege, the team found opportunity to meet both spiritual and physical needs. “The Lord gave us many souls who believed in Christ there,” the team leader said.

In northern Erbil, the leader’s team met with displaced Yazidis, a predominantly Kurdish ethnic group practicing a mix of Zoroastrian, Islamic, and Christian rituals, who suffered the slaughter of an estimated 500 of their members at the hands of ISIS. Some 130,000 Yazidis of Sinjar had fled to Irbil or farther north to Dohuk. “Our ministry to them was filled with tears and broken hearts to hear scary stories about abducted children and women and the slaughter of men,” the team leader said.

The Iraqi ministry team has prepared 2,000 Bibles, including those for children, plus 2,500 New Testaments in Arabic, Aramaic and Kurdish, along with tracts and Bible-based coloring books. 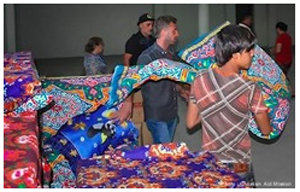 “We have a lot more that is needed, such as gas, workers’ support, radios, clothing and miscellaneous ministry items,” the team leader said.

Christian Aid Mission is helping the ministry to provide two kinds of food to Iraq’s internally displaced people – one for those who have cooking facilities, and another for those who are homeless. A box containing eggs, salt, oil, rice, cheese, beef, tomato paste, powdered milk, macaroni and bread costs $25. For 300 tents for small families, the cost comes to $7,500.

The team provides 800 sandwiches a day to different areas and groups at a cost of $2 per sandwich, which amounts to a weekly cost of $11,200. The ministry has borrowed sleeping bags and mattresses from a local store with the hope of repaying the merchants at $20 per mattress. “Four hundred mattresses cost $8,000, and we are almost out,” the leader said.

The ministry team also provides medicines for blood pressure, diabetes, headaches and stomach ailments, along with personal hygiene items. “Our goal was to provide $10,000 worth. We are starting with only $2,000 now,” he said. “Thank you so much for your prayers and support.”