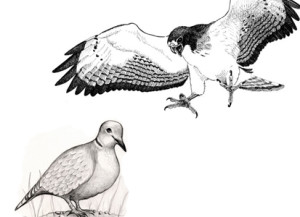 An hour ago I was on a walk, something I often do after getting back from church. Suddenly I started flaying my arms wildly as it sounded like a flock of birds was flying right at me. Then I saw that a dove or quail had been in some cactus right next to the sidewalk I was on and had taken off as I passed by. It flew into some bushes a few yards away and was followed closely by a small hawk.

The hawk perched on the eve of a house, directly above the bush where the dove was. This was surprising and looked interesting. I walked up the sidewalk and stood there to see what would happen. Basically nothing happened for several minutes. Standing there, I was thinking about the whole thing. Hawks stay alive by killing things. That’s just the nature of hawks. And of course the dove had been hiding from the hawk probably down in the cactus I’d just walked by and was simply trying to stay alive. I found myself sympathizing with the dove, although I understood the hawk’s viewpoint. I thought about shooing the hawk off but I would have had to walk into someone’s yard to do that. Also it wasn’t really essential that I get involved with this, even though my thoughts were with the dove.

I walked on down to the park, took my prayer time and walked back home. As I walked back by where the hawk and dove had been, I noticed that the hawk was gone. No feathers were on the yard or around. So my guess is that the hawk got tired of waiting for the dove to fly out of the bush and it went off, seeking better game.

I walked back home, thinking about my experiences at church today and in the last months. And I was thinking some about the hawk and the dove. There was the hawk, trying to prey upon the dove. And I was thinking if any of this was significant and maybe why the Lord let that happen right in front of me.

And the thought came to me that this was all a bit of an allegory of how some things are in some churches and in Christianity right now. Jesus said to His followers, “Be wise as serpents and harmless as doves.” (Matthew 10:16) When the Holy Spirit descended on Jesus, it was said to be like a dove. (Luke 3:22) Often God’s people are pictured as sheep but sometimes they are pictured as doves. Jesus called them “harmless”. So I suppose a real church or gathering of the people of God should be somewhat like a flock of doves, harmless, together and free. But from this experience today that the Lord was letting me have, I do have to admit that some churches I’ve been to are like that dove in the bush with the hawk just above it.

In 2010 in Houston, Texas, after returning from a lifetime of missionary service abroad, I was somewhat desperate to find a home church. I ended up going to a large evangelical church in north Houston, hoping to find Christian friends to connect with. The first Sunday the sermon was pretty good. I went on to the adult Sunday school, somewhat wandering in as someone new, a guest. Before the meeting was started, a woman began talking to me about President Obama. She went on and on about how he was just the same as the former dictator of Romania, Nicolae Ceausescu. Others from the class were standing around as she talked to me, a visitor.

As a missionary, I was in Bucharest, Romania for four months in early 1992, at a time when the social upheavals in Romania were still very much in flux. For much of my life, Eastern Europe had been the field I was called to. So to compare our President to a Communist dictator was not something I felt comfortable with, either factually, or emotionally.

Also it was heartbreaking that this was a well known evangelical church, with the latest in facilities, its own school and thousands of attendees. I was someone who was really seeking for a Christian family and then I was set upon as soon as I entered a Sunday school by a radical political agenda. I tried another Sunday school group in the same church next week. Again the Sunday school theme of the hour was also dominated by a strong political agenda, with much in the way of disparaging comments about those of the opposite view.

“The hawks” were preying on “the doves”. I ended up ceasing my search for a church home in Houston. Probably if I’d looked and looked, I could have found something. But I had a demanding job and also I felt still called to work on the series of videos that have finally been hosted now on a web site.

But even here in Austin I find  “hawks”, people in the congregation I go to who feel that the body of Christ is the place to recruit and propagate their strongly political, worldly message on Sunday mornings. I don’t begrudge people having their political views. I was brought up in a very politically minded family and there’s a time and a place for that. But I am a dove and that’s what Jesus called His followers.  I don’t want to be attacked by hawks in church on Sunday morning.

(How about you? Have any thoughts about “hawks and doves”? I love to hear from you about it. You can use the reply box below. God bless you!)