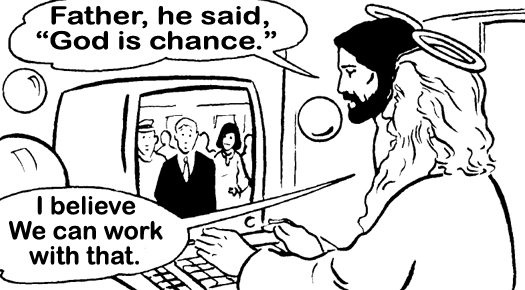 I was a freshman in university in Austin, Texas years ago, in the middle of a conversation with my friends when I blurted out, “God is chance!” At the time it really seemed like an epiphany. If you’re an atheist, as I was, “Chance” seems to be the ultimate ingredient that’s caused everything. Atheists believe that everything “just happened” from a series of accidents. Those beautiful eyes of your loved one? Just a series of numberless mutations over trillions of years that ended up being a human eye. Or that flower, that strange bird, and on and on? Just chance, accidents, coincidences and happenstance.

My life back then was already on a huge rollercoaster with unseen forces I was totally unaware of. But I really believe that off Somewhere, Someone saw me say “God is chance” that day and kind of marked it down right then. Because for the next couple of years, things kept “happening” to me. And I gradually realized more and more that those things just defied the law of averages that I thought was the ultimate arbitrator of all that occurs on earth.

But like I said about reason in “Reason? Or the Miraculous”, it’s not like I don’t believe in chance. The Bible certainly talks about reason and it talks about chance too. In I Samuel 6:9 it says, “…it was a chance that happened to us.” And Ecclesiastes 9:11 says “…time and chance happen to them all.” 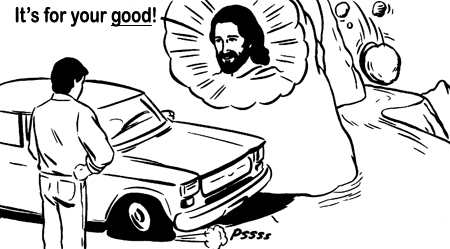 On the other hand, some things are not chance. But so often our eyes are blinded to the spiritual cause and often angelic intervention that brought something on. I’ll give you an example.

For years I’d been an idol worshipper. No, not Moloch, Baal or Ashtoreth. I worshipped a certain kind of sports car. I’d had a picture of it on my bedroom wall since I was 14. I dreamed of it, I longed for it, I spoke of it and I was determined in my heart that I would have it, no matter what. And so, in university, I finally got it.

But it was like how the Israelites lusted after meat in the wilderness and finally God sent so many quail that they gorged themselves on the quail and many died.  Speaking about this in Psalms 106.15, it says of God, “And He gave them their requests, but sent leanness to their souls”. That’s how that sports car was, something I “just had to have”. So I got it but God really “sent leanness” to my soul. In fact, He got a lot of mileage out of that mistake.

A few days after I got the sports car, I was driving near the campus, just bursting with pride. The top was down, I felt so totally cool and I was virtually expecting that hot women would be jumping into the passenger seat when I stopped at a red light. What I didn’t notice was a car that had stopped in the street ahead of me. While I was distracted, I plowed into the back of that stalled car. Because my car was so low to the ground, it went under that car, seriously disfiguring its high class looks and somewhat damaging the engine. 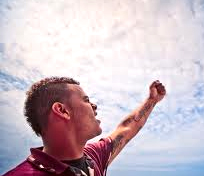 My response? Shock of course. And anger. But somehow in my heart, I knew it was more than an accident. I remember so distinctly either that I literally shook my fist into the air or, if I didn’t do it physically, I certainly did it in my heart and mind. Who was I shaking my fist at? “The Fates”, as I called them back then. I just knew that it was something with a message to it.

“So you want this fancy car? OK, you got it; but now this is going to happen.”

“Why?” I screamed in my heart. I just instinctively knew that it was more than happenstance. It was part of something that was greater than me. What, I totally didn’t know. Had “the Fates”, some mystical Greek gods, done this to me? But God had smashed my idol. “I will have no other Gods before me,” He says. (Exodus 20:3)

Other things keep happening to me from time to time during those years.  Some were “incredible good luck” and other things were “really bad luck”. But I kept all these things and pondered them, trying to make sense out of it. Now I know that much of the time, it wasn’t chance. It was the hand of God, allowing some things and keeping me back from others. 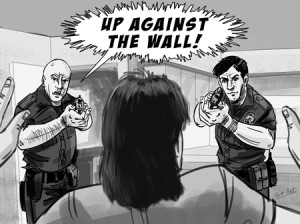 There were so many incredibly foolish things I nearly did or actually did do.  But the hand of God either prevented me from doing them or kept me back from suffering very badly for my foolishness. Another example of this was when the police raided my apartment, looking for drugs. I wrote about this in “Up Against the Wall!”

“A man’s heart devises his way but the Lord directs his steps.” (Proverbs 16:9)  In time and ultimately, like I wrote in “Lucifer and the White Moths”, the Lord delivered me from my unbelief and darkened life, translating me into the world of His Spirit. 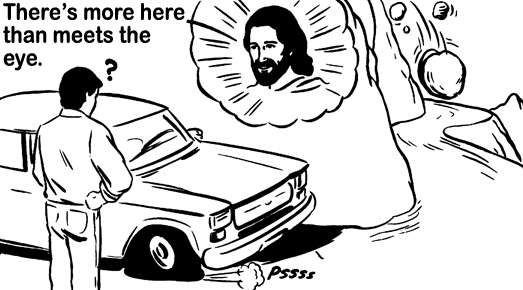 I found that my idea of “God is chance” was a very dim statement. But it was almost like the Lord decided to take me up on that one and kept letting “accidents” happen for a couple of years, just to show me that “there’s more than meets the eye”, a whole world of spirits and spiritual activity that we mortals really need to realize, acknowledge and get on the right side of, the side of the God of Abraham and His Son, Jesus.