Home » Basic Christianity » “Get quickly out of Jerusalem” 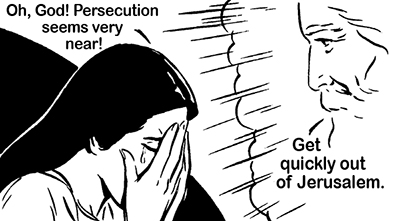 Sometimes I get some really interesting responses to the blog articles I write. Yesterday I published the article that goes with the live class on Acts 22. It’s a very moving chapter and has always been of interest to me. A major highpoint in the chapter is the moment when the Lord appears to Paul in Jerusalem to emphatically direct him to immediately get out of Jerusalem, that Paul’s brethren the Jews would not accept his teachings. But Paul didn’t do that.

Today I got this response back from a fellow missionary. I’ve edited a few things to keep some of the unnecessary details to a minimum. It’s an incredible story of how God can use what He said 2000 years ago to speak vehemently to our hearts today when it applies to us. Here are parts of what she wrote:

Years ago I was on a foreign mission field that I loved very much. But, as can happen, the denomination I was working with began to receive some relatively severe persecution there. Those of us who labored on that field could see that it was time to get out of the country as things were getting serious. 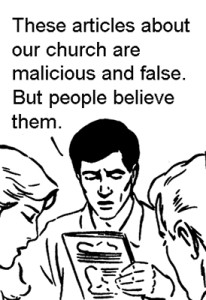 But I was so attached to that country, their ways and those sweet people. I felt proud that I’d served the Lord there, witnessing almost every day to those people and so I said: “I will stay here till I die! I gave my life for this country, and if I have to go underground and there are just a tiny number of us, so be it.”

Many others were preparing to move on to other fields or back to their home countries. But I was still sure I was going to stay, till one day while sitting on a bus, I opened the New Testament and my eyes immediately fell upon the verse, Acts 22:18!

“Make haste and get quickly out of Jerusalem for they will not receive your testimony concerning me.”

So the Lord was saying that my beloved field and city was my Jerusalem! When I read the verse, I really didn’t just read it — it screamed at me! So it was a turning point in my life and I decided to leave. But one thing I didn’t do. The Lord had said, “Make haste!” But I didn’t.

There were so many things to prepare, passports and paper work, so I took it easy. And then, not long after I got that shock and warning from the Lord, anti-Christian forces had been able to stir up the media and authorities so that some of us were actually detained and arrested!

Eventually, when the truth came out that it was nothing more than religious persecution by the dominate religious powers of that country against a minority denomination, we were set free and exonerated from all charges. Meanwhile some officials had “lost” my documents in the institution we were detained in. But I got new ones in just one day. Normally it took like 2 months to get new documents for foreigners.

Then I had gone to confirm the tickets with my son —and got robbed in the very busy train station of the capital! All my tickets, my documents and some money were gone. I had exactly enough to pay for the ticket home.

To make a long story short, I finally did leave the country the Lord had clearly told me to leave. But it was a long and tough time we experienced and sometimes it was really rough. Kind of like the verse, “The way of the transgressor is hard.”  (Proverbs 13:15) I hadn’t really obeyed the thing I’d gotten that verse from the Lord about. And so I was a transgressor in this and it was a hard time in a number of ways.

The Lord had made it super clear: “Okay, so you wanted to stay in this place forever? Just to make your mind up, I will help you and make you feel so fed up with the place that you won’t want to come back, unless I tell you!” And that is what happened.

Isn’t that amazing? God is alive and well and communicating with His children. “Surely the Lord God will do nothing but that He reveals His secrets to His servants the prophets.” (Amos 3:7) And that doesn’t always mean you have to be an Old Testament prophet before God reveals what He will do or what sometimes we need to do.

God has His times. When God says “now”, you’d better obey God in that split second of that golden opportunity when the conviction of His Spirit is hot and heavy upon you. “He that hesitates is lost” and it can even cost you your life, or at least months of hardship that could be avoided if we’d just obeyed the Lord when He says to do something.

What a lesson. God help us to obey those checks from His Spirit, even if they sometimes seem strange or there doesn’t seem to be any visible reason in front of us that “confirms” what the Lord is urging us to do through the voice of His Spirit in our hearts. “He gives His Holy Spirit to them that obey Him.” (Acts 5:39)