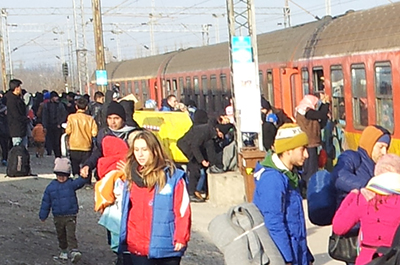 Yesterday I had one of the most interesting experiences I’ve had in many years. I spent the day on the border between Macedonia and Serbia, working with friends who minister to many hundreds of refugees from the Middle East. They disembark at a train stop there before walking the two kilometers from Macedonia to Serbia where they’re able to take another train on north towards what they hope will be the safety and hospitality of Germany or other places in Western Europe. 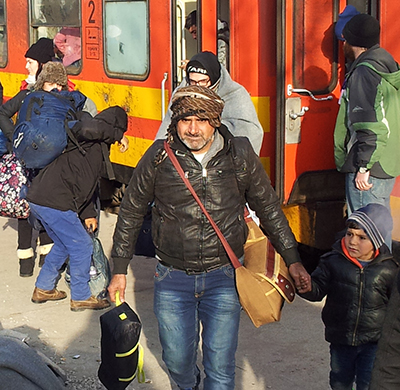 This is a true phenomenon of our times, an exodus and migration unlike anything I’ve seen in my lifetime. As you may know, I’ve written repeatedly about this and about these Islamic people. So to actually be in the midst of it all, to meet individuals who 10 days ago were in their home cities of Idleb or Damascus, Syria, or some who were from Afghanistan, was a remarkable experiences and very moving.

But even more, it was a thrill to be able to pass on to these dear ones some portions of the Bible in their language which they could take with them on their journey, to read, study and perhaps share with their friends and family. I was outside all day and it was below freezing the whole time. But I’ve seldom had a time in recent years when, at the end of the day, I felt happier and more fulfilled than yesterday.

The experience reminded me of when I was in Aceh province, Indonesia in the immediate aftermath of the Asian tsunami which happened 11 years ago this week. I wrote about that here. Back then, four of us were able to travel to that remote province a week after the tsunami and to work in refugee camps there. Yesterday I saw again many of the same NGO’s and UN agencies that I’d first met there. The  UNHCR has a major presence at this railroad siding where all these multitudes came to, the Mercy Corp has a presence, SOS Children, as well as of course the Macedonian government’s involvement.

There’s a whole aspect in these situations that’s interesting from almost a secular, sociological view. How does this all get organized, who shows up to help, what are the folks like who come out  to stand in the freezing cold while they wait for the trains to pull in? Who cleans up the mess, what kind of security is needed, how dangerous is it, are the refugees thankful or belligerent?

And for ones like me and my friends, there’s an additional purpose and vision to it all. As I’ve written about, I feel this is an opportunity presented to us from God to share His truths with these ones. That can be controversial. But then the whole injunction from Jesus in the New Testament to share His love and truth “in all the world and to every creature”  (Mark 16:15) is bitterly opposed by millions of people. Nevertheless, we who believe in Him are called to actively share our faith and this was possible for me yesterday in wonderful ways.

I went there with friends who regularly go there and other places to minister to these people in ways they can. They and other groups who go there offer clothes, bread, hot soup and tea, directions, access to the internet, and overnight accommodations in temporary housing constructed there in some cases. And, yes, the refugees are thankful. I hope the pictures I took there yesterday will give you a firsthand impression of what it was like. The  expression on their faces really can tell you a lot as they leave the train and mill about on the sidings, trying to understand what was going on, what was available to them right then and what the next step would be.

I had brought with me copies of the Gospel of Luke in Arabic. It turned out that, after counseling with friends, I began to move about in the crowd, just engaging in conversations as best as I could. Many spoke English. I was glad to find how many of them were from Syria, I’d say that was the largest group. The second largest group was people from Afghanistan. 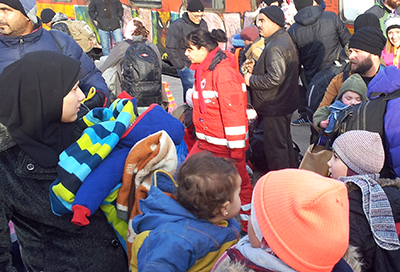 Trying to get my signals from the Lord, after talking a little with ones I would meet, I’d pull out a copy of the Gospel of Luke in Arabic and say that I had something I wanted to share with them. No one turned it down. Almost everyone immediately recognized what it was and began looking through the pages. With the Syrians, I told them that 6 months ago I was on their border, in the city of Reyhanli. I wrote about that experience in “Visiting Syria”. Some of them came from just across the border, some 30 kilometers from where I was in March.

One group of Syrians I talked with were Christians. They all had Christian names; perhaps there were 20 men, women and children traveling together. The man I first spoke to asked me, very humble and sincerely, why Americans didn’t like Syrians. I wasn’t stunned by the question but it was difficult. 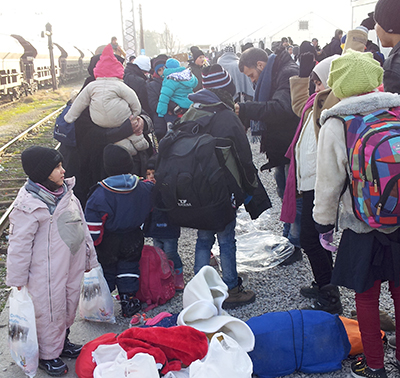 So I told him that it was a combination of many things. For one, I told him, not all Americans are like that but some are. Partly it’s legitimate fear of the tiny minority of Middle Eastern people who’ve chosen to attack the West. But also, I told him that these fears were greatly enhanced by propaganda and media sensationalism, as well as nationalism and even racism.

All in all it was an amazing day to be one-on-one with these people and as well to be there as an ambassador of the Lord. To share His love and truth with some of the most needy, desperate people in the world at this time is about as good as it gets.