Home » Angels, Miracles and the spirit world » “Is it not a little one?”

Jun 16, 2017 · by Mark McMillion · In: Angels, Miracles and the spirit world, Basic Christianity, Insights, My past 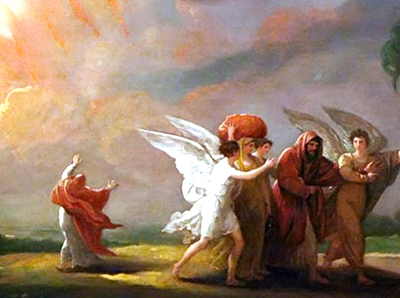 Jesus said that the very endtime would be like “the days of Lot” (Luke 17:28). So what can we learn from that? Lot had just been rescued and delivered from the fiery judgments of God which He had rained down on Sodom and Gomorrah. Lot, his wife and two daughters had to be led by the hand out of Sodom, being warned by the angels to not even look back. Famously, Lot’s wife did look back and was turned into a pillar of salt. That might be hard to believe but evidently Jesus Christ believed it. See Luke 17:32.

You might think all this would be an incredible shake-up for Lot. My gosh, that guy is going to walk the straight and narrow the rest of his life, no? Evidently not. And it’s a watershed moment in the history of sin when we read what happened next. Lot turned to the angels as they passed by another heathen town of wickedness and said to the angel, “Behold, this city is near to flee unto, and it is a little one. Oh, let me escape thither; is it not a little one? And my soul shall have rest.” (Genesis 19:20) 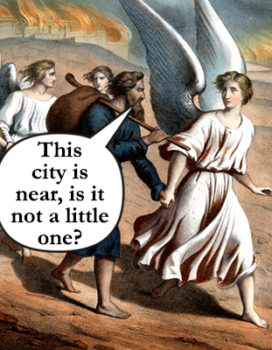 Folks, you can get the soul out of the worldly satanic system, whether it be Sodom of old or the satanic amalgam of metropolises that now dominate the earth. But just like with Lot, it’s not easy to get the satanic system out of the soul. God had “delivered just Lot, vexed with the filthy conversation of the wicked.” (II Peter 2:7) But was Lot all contrite and trembling before the Lord? Did Lot make a bee line to his Godly uncle Abraham and his family up in the hills and highlands of God, begging to be taken back in like a prequel to the Prodigal son?

Nope, Lot immediately tried to cut a deal with the angels, “reasoning” with them that another little Babylon-like city not far from Sodom would do just fine and he’d really like to get back to some system preserving compromises and worldliness, even after God had just destroyed Sodom and Gomorrah literally right before their eyes.

“Ah,” you say, “this happened 4000 years ago and things are different today.” Really? If you think that, I’ve got some bad news for you. It’s like Jeremiah said, “The heart is deceitful above all things and desperately wicked, who can know it?” (Jeremiah 17:9) As difficult as it was to go through, I’m thankful that God made about as plain to me as He could just how hopelessly sinful and lost I was long ago. My own ignorance, my own willful darkness very nearly took my life except for the totally undeserved, almost strange mercy of God who brought light to my soul when I was writhing in the agonies of the afterlife without God.

“Oh, Mark! Why did God do that to you?! Why did He treat you like that? Why does a God of love send us to hell?!!” Sister or brother, you got it wrong there. God doesn’t send us to hell. We send ourselves to hell through our willful, stubborn ignorance and choosing the wrong path, away from the presence of God to live in the presence of our choices which we made against His truth and light.

He didn’t have to plead with the angels to let him go to a new manifestation of the worldly system of his day. Lot could have asked to have a place at his uncle Abraham’s table and to learn more fully of the ways of God as evidently Lot did believe in the Lord. But it’s just like how it is for millions and billions of people: sin does have dominion over them. And except for the mercy of God, sin will and does have dominion over every one of us. Lot was like the Prodigal Son but who never “came to himself” (Luke 15:17). And sadly there are a lot of those it seems. 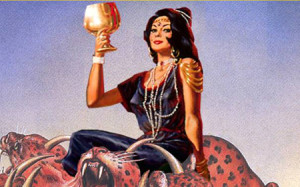 In the last book in the Bible, we are told of “Babylon the Great”, pictured as a wretched prostitute which sits upon many nations and rules over the kings of the earth. And God says, “Come out of her, My people, that you partake not of her sins or receive of her plagues.” (Revelation 18:4) But God in a sense has been saying that for thousands of years. He even had the angels take Lot and his family out of the Babylon of his day by the hand. And in the last days before the setting up of God’s kingdom on earth, He is going to destroy the final Babylon the Great, this final Sodom and Gomorrah that has now spread across the earth. Whether or not any of His people will get the message and “come out of her” remains to be seen. 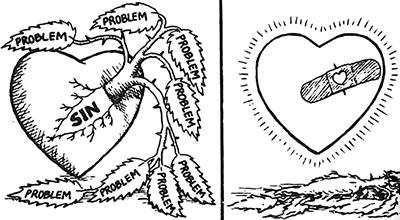 We need to acknowledge our sinful nature and ways every single day and pray desperately and sincerely that God will “withhold you from sinning against Me.” (Genesis 20:6) Because as sure as your garden will start turning up weeds if you don’t diligent tend it, your own human heart and nature will rise up against your Christian convictions and character if you don’t daily “keep your heart with all diligence.” (Proverbs 4:23)

“Oh Mark, I’m not going to read your blog posts anymore! I’m going back to Joel Osteen and his lovely wife. They’re so sweet and positive, always encouraging and uplifting, not like you!” Friends, I’m all for being loving, positive and uplifting. But I’m just telling you from extremely hard experience that none of us had better ever get to the place where we forget how much we need the Lord , how much we should be able to say with the Apostle Paul, “Oh wretched man that I am, who shall deliver me from the body of this death?!” (Romans 7:24) 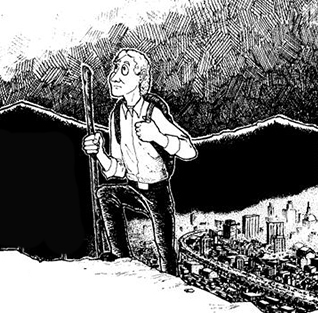 Don’t be like Lot. If the Lord has delivered you from your Sodom and Gomorrah, don’t beg the angels to let you off at the next hellish place just down the road so you can continue in the compromised worldliness that is anathema to God’s highest and best in your life. Instead, be like Moses who “forsook Egypt” (Hebrews 11:27) because “he had respect unto the recompense of the reward.” (Hebrews 11:26) What Egypt, Sodom or Babylon is God calling you out of?