Home » Current events » “God is not the author of confusion.” 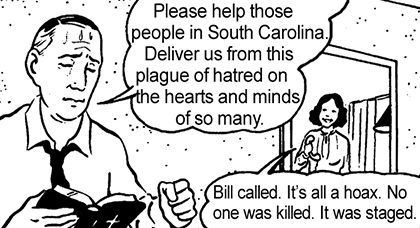 Umm, I’m a little bit mad. Truth is important to me, I believe there is truth. It’s not always clear and there can be subtleties and all that. But fundamentally some things are true and some are not. Jesus said, “Everyone who is of the truth hears my voice“. (John 18:37) He said that He was the truth.(John 14:6) He said the Holy Spirit is “the spirit of Truth”. (John 16:13) If you’re a Christian (or perhaps just a believer in the God of Abraham), then truth really should be important to you.

Here’s why this has come up for me. At the moment, one of the main things in the news is the murder of 9 African-Americans in a historic church in Charleston, South Carolina. But in the last few days, numerous web sites and articles are popping up to tell us “it ain’t necessarily so.” “Those murders didn’t happen at all. It was all staged by sinister forces. Actors were used!” This was also said in the same way at the time of the murder of the 20 children and 6 adults in Connecticut in 2012. One thing I believe about this: either those murders happened or they didn’t.

If the main stream media is being used to deceive the multitudes and the hoax-callers are right, then I firmly believe that some grass roots reporter for a local newspaper or TV station could be able to sift out the evidence on this pretty easy. Folks, truth is not that hard to find out. Nine people were killed a few days ago. You say that didn’t happen? Someone go interview the relatives. Go to the morgue. This truly isn’t rocket science. Will the caskets be open at the funerals? Come on!

It just gets my goat that someone is really telling us a whopper. And sadly very many Americans are likely to be affected by this. Very many now feel that the main stream media has zero credibility. They say they don’t believe anything they see on the main media outlets anymore. I’m certainly not unsympathetic to some of those views. So much is just tripe and hogwash, “brought to you by” unscrupulous mega-powerful folks with agendas that are not for the best of society. 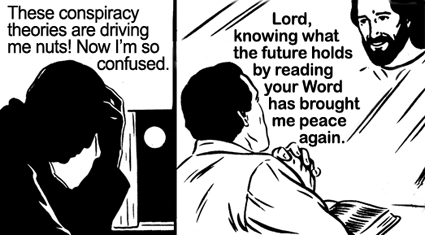 But then, what are you going to do? Are you going to believe the plethora of websites that have sprung up offering you what they say as “really the truth”? And you think those sites are going to tell you the truth? They don’t have an agenda? My experience with many of those sites is that they’re actually usually worse than the main stream media that they’re supposed to be the alternative to.

Do you know how easy it is to set up a web site and then suddenly become some acclaimed pundit? All you need is Microsoft Word, maybe a little Photoshop experience, the basics of a WordPress web site and… presto! You are an international commentator! And if you’re sensational enough, you’re articles will go viral and you’ll really be making believers of people, no matter how loony and “out there” your ideas are.

May God truly help us all. The Bible says, “Be not carried about with every wind of doctrine.” (Ephesians 4:14) How very much so many people here are exactly in that condition. They don’t know what to believe. “There was a mass murder!” “No, there wasn’t! It was all staged!” “There is a crisis!” “No, there’s not! It’s just a fiction made up by the folks on the other side!” Like the Bible says of the days of old, “Truth is perished.” (Jeremiah 7:28) 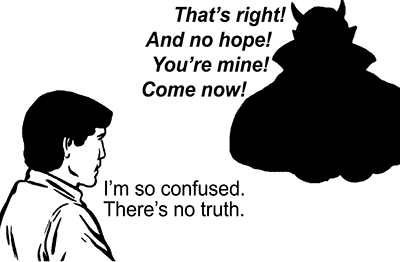 It’s heart breaking. It’s infuriating. “If the foundations be destroyed, what can the righteous do?” (Psalms 11:3) But when we don’t even know what the truth is anymore, we don’t know who, if anyone, we can believe, then we are ripe for the picking of the Grim Reaper, in whatever fashion he may come.

Our local newspaper here has what they call a “truth-o-meter”. It seems to be something nationally syndicated and it investigates what’s being said by noted figures, usually politicians. The worst rating is “pants on fire”, just something that is utterly false, like the saying, “Liar, liar, pants on fire.” But then they do find some things to be true. Certainly we don’t have to be thrown into confusion by a question of whether or not this recent mass murder in South Carolina actually happened.

For me, I’ve come to find that just because the main stream media say something, I can’t just utterly discount that. And when some two-bit, fly-by-night website tells me some alarmist, extremist “news”, I certainly should take that with a huge grain of salt, if at all. I sure hope other people are doing the same. Actually a lot of times we should be calling a solid “BS” on some of these extremist sites that are just disseminating alarmist, often racist or some other hate-filled screed. May it not be said of us, as it was said of Israel of old, “My people love to have it so” (Jeremiah 5:31), when falsehood and deceit were loved and they ruled so rampantly that Israel back then was ultimately destroyed for her sins.

And just to be clear, I’m certainly not saying the main stream media is always right. At times some “voice in the wilderness” tells us the truth that others won’t. Like with Watergate, the Pentagon Papers or Edward Snowden. Or John the Baptist. 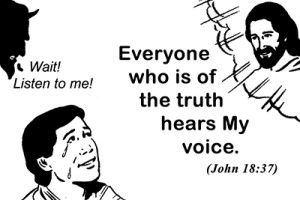 Demand truth. Resist confusion. Get to the bottom of the thing. Don’t be “carried about with every wind of doctrine” (Eph. 4:14)  but “speak the truth in love” (Eph. 4:15) . Don’t let these false websites play to your prejudices, your fears and hatreds. When we lose our love for, and recognition of the truth, there really isn’t much left before our final surrender and defeat, as an individual or a nation.