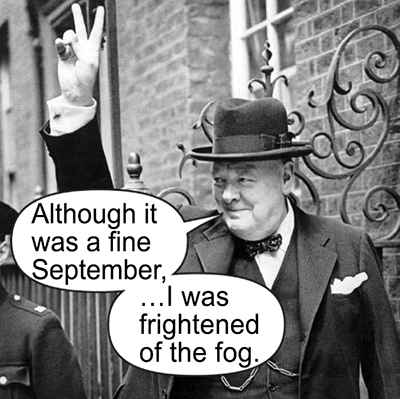 Winston Churchill, writing about 1940 said, “Although it was a fine September, I was frightened of the fog.” Why? Because he knew that the fog was the best cover the enemy could have for a German invasion of Britain at that time. And that’s in many ways where we are now: in a fog.

Admittedly, some think they are seeing utterly clearly and can emphatically tell you who the good guys are and who are the bad. But sometimes, the wrong people have the right message and the right people have the wrong message. It’s rather like great confusion.

Have you ever looked up at the sky and seen some clouds going one direction but others going another at the same time? In one place in the Bible it says, “The winds were contrary.” (Acts 27:4) A bit like it is now, it seems to me. And it’s the easiest time for the enemy to invade the land or our own hearts: when we are in a fog and can’t really see as clearly many things that seemed clear not so long ago. 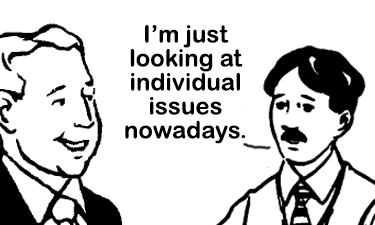 It’s like that to some degree for me now and perhaps for many people. A dear friend said something to me a few days ago that was profound, although he didn’t probably intend it that way. He simply said that he was looking at individual issues rather than choosing one side or the other in the big picture.

I think that might hold a lot of wisdom for the Christian people of faith right now. For me it’s been a help. If I look at individual issues affecting the world right now, I can feel a leading of the Lord on them, if I just look at them one at a time. But forming some composite big picture, some “unified field” as they say in the realm of physics, I’m not really able to do that right now.

And maybe as a Christian disciple, I don’t need to. Maybe I don’t need to identify with the various yardsticks that are so prevalent and demanding right now. No, I don’t at all swear allegiance to one political party or the other, “left” or “right”. I just feel vehemently that my loyalty and allegiance should continue to be to the Son of God Who will ultimately return to establish the Kingdom of God on earth, as He clearly said He would. 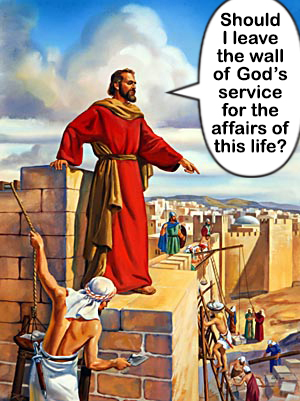 Should I move away from that? Should any of us come off the wall of Christian discipleship to become embroiled with “the course of this world” and “the affairs of this life”?  (Ephesians 2:2, II Tim. 2:4) No matter how loud the clamor is between one worldly faction and the other right now?

I just can’t, or at least shouldn’t. But there is a strong pull and I do have long-time Christian disciple friends who’ve now engaged themselves almost totally within those controversies and have, in so doing, moved away from their original calling to an allegiance with Christ and His service within this present evil world.

But the enemy can attack most easily when there is a fog. That may be why Paul said, “God is not the author of confusion but of peace.” (I Corinthians 14:33) If I let present contrary winds and an inability to as easily discern things as it seemed possible in the past, then I can allow that wedge to be a device of the enemy to move in heavily, as he always attempts to do, and to overwhelm me with uncertainty, perplexity and confusion. Before you know it, as Churchill feared the Germans would do in 1940, the enemy is landing troops upon your land and is advancing in a blitzkrieg war while you pause in perplexity, with your guard dropped.

The solution? Remain vigilant. “Strengthen the things that remain.”  (Revelation 3:2) “Be sober, be vigilant, for your adversary the devil as a roaring lion, walks about, seeking whom he may devour.” (I Peter 5:8)

Having perfect understanding and being able to see clearly the horizon in every direction is not guaranteed for Christian discipleship. Sometimes we simply don’t have that. We have to “walk by faith and not by sight.” (I Corinthians 5:8) But the enemy is always there to cast fiery darts into our hearts and minds, sowing fear, uncertainty, questions and doing all he can to reverse the polarity so that he can launch an attack on God’s homeland, which is our souls, especially when the overall outlook seems foggy.

I’ll have to admit, it has bothered me that I have not been able to feel I see things as clearly as I did until very recently. But on the other hand, I have more than enough of the Lord’s grace to handle all that is before me on the short term. So while the fog clears, I’m going to concentrate on the short term goals and vision which is still just fine. And perhaps before long, other things will become clearer. Still, I am going to remain vigilant against the attacks of the enemy who has already tried to attack me in this present somewhat foggy time.

The enemy is always threatening, broadcasting his woes and contrary confusion, all the much more when it is foggy. But the Lord’s directional systems still work just as well in fog as they do in clear skies.  Meanwhile, when it comes to the enemy of our souls, “We are not ignorant of his devices.” (II Corinthians 2:11)