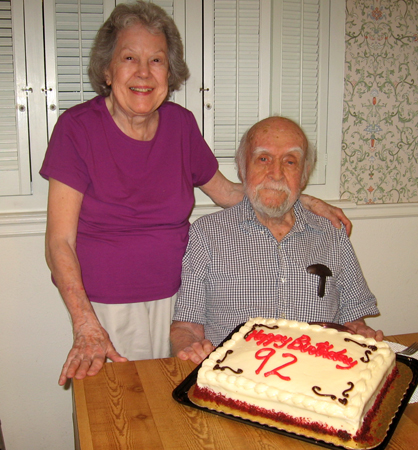 Four days ago I moved back here to Texas to attend the funeral of my dear mother, Virginia McMillion. I was in Ukraine when I heard from relatives here that she had taken a sudden turn for the worse. I made it back to my base in Romania, closed it and was able to fly here the day before her funeral.

So both physically and emotionally it’s been one of the more trying weeks of my life. You may know that my dad passed away at the age of 92 in 2014. Here’s an article I wrote about him and his life, “Bonner McMillion“. The picture you see there is of my mom and dad at my dad’s 92nd birthday in November of 2013. While the blog post about my dad is mainly about him, a lot there is a reflection of how my mother was as well.

My mom was a very loving and kind matriarch of our family and she will be very much missed. While I was at ground zero of “the generation gap” as I grew up, in later years my relationship with my folks got better. They invited me to live with them in 2012 as my mom wasn’t able to take care of my dad who by then needed full time care. He passed away about 18 months after I moved into the house and I lived another 18 months with my mom, until August of last year when I moved to Romania.

It’s sometimes difficult to explain to others what someone has meant to you. In the matter of my parents and me, things are even more complicated by many layers of twisting and turnings in our lives, including some strong disagreements and differing views. But it’s been said that out of the twisting and suffering of the life of King David came forth the sweetness of the Psalms and that’s true in this case also.

The fact that I became a born again Christian and accepted the call of full time Christian service in my 20’s was very difficult for my parents to understand or accept. But tolerance and inclusion always played an integral part of their lives and they tried to be understanding. As the years went by, I myself became less adamant and blunt in expressing my faith while still retaining my beliefs and the path God set me on. By the time I was in my 60’s and my parents reached their 90’s, there was a much better relationship between us than there had been in earlier years.

There’s a lot I wish I could tell you about my parents and upbringing as I was very much prepared for a life of Christian service through my parents, even though they themselves were not overt Christian ministers themselves. It’s like the verses in James 2 where it is said, “I will show you my faith by my works.” (James 2:18) Without going off the very deep end on that subject, I’ll just say that my parents very often showed a sample of kindness, love, self-sacrifice and empathy that never wavered in their lives. It was through my parents that I learned to care about people and the greater world we live in. That’s why I wanted to be a politician when I was still growing up, thinking somehow that I could make a better world that way. God saw it all and called me to serve Him but the principle of service and living for others was already there from what I’d learned from my parents.

I had an interesting experience the morning of my mom’s funeral. I was very jet lagged and had not planned to speak at the funeral as I figured it would just have been too much for me. But, surprisingly, some ideas did come to me of things I could share about what kind of family I come from and what kind of families my mother and father come from.  A while back I wrote about some of this in the blog post “Texas People”. And I’ll try to write up what I shared at the funereal as two stories of my parent’s upbringing came to mind which helped to show the heritage they came from which they passed on to me and my sisters.

I’m very much in a recovery mode right now, both physically and emotionally. It’s a major end of an era in my life and the life of my family. I’m so thankful that I have the Lord to hold on to during this time and I’ve been reminded that I still have the things He has done and continues to do in my life. But rebasing back to the States has been necessary and that also is a rather big and surprising turn of events which I’m still digesting as I get my bearings in this new situation. And thanks to the many of you who’ve prayed for me and sent words of love and encouragement during this time. I aim to continue to do what He has led me to do. But this has been a pretty big event and I’m looking to Him to keep me going and on the right course in the weeks and months to come. God bless you, love to you all, Mark